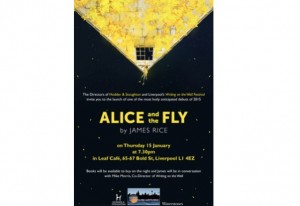 Liverpool based novelist James Rice’s breath-taking debut Alice and the Fly is set to enjoy a book launch at Leaf Café on Bold Street. James, winner of The Writing on the Wall Festival’s Pulp Idol competition back in 2010, is just 26 years old and from Maghull. When he’s not busy working on his second novel, James works as a bookseller at Waterstones in Southport.

James Rices’s first novel is a beautiful, haunting, darkly funny and uncomfortably genuine story. This is a book about phobias and obsessions, isolation and dark corners. It’s about families, friendships, and their carefully preserved secrets. But more than these things, it’s about love. Finding love, in any of its forms, and nurturing it.

Greg doesn’t have many friends and a home life that’s severely lacking in affection. When pretty, popular Alice from school smiles at him on the bus his heart soars and a painful obsession takes hold. Though seemingly their lives are worlds apart, Greg and Alice have more in common than some might think.

Miss Hayes has a new theory. She thinks my condition’s caused by some traumatic incident from my past I keep deep-rooted in my mind. As soon as I come clean I’ll flood out all these tears and it’ll all be ok and I won’t be scared of Them anymore. The truth is I can’t think of any single traumatic childhood incident to tell her. I mean, there are plenty of bad memories – Herb’s death, or the time I bit the hole in my tongue, or Finners Island, out on the boat with Sarah – but none of these are what caused the phobia. I’ve always had it. It’s Them. I’m just scared of Them. It’s that simple.

James, who admits the book is at least partly autobiographical says ‘I was chronically shy as a child. On one occasion I had Tango poured over my head. I wanted to distance myself from school, from that whole experience. To have a keep-your-head-down-and-get-through-it attitude. I wanted to write something from the point of view of a schoolboy that felt real – real to the experience I had at school. And I wanted it to be a story about love.’

James Rice lives in Liverpool where in 2010 the first chapter of Alice and the Fly won the Writing on the Wall Festival’s novel-writing competition Pulp Idol. In 2011 he completed an MA in Writing at Liverpool John Moores University, allowing him to finish his debut novel. He also writes short stories, several of which have been published, and writes songs with his friend Josh. He is currently working at Southport Waterstones, and is writing his second novel.

Alice and the Fly is already creating a lot of interest amongst the publishing trade and readers alike – Helen Walsh, author of The Lemon Grove called it: ‘One of the most stunning debuts I’ve read in a long time. The talent behind it is huge’ and fans of the novel are already posting their rave reviews on James’ Amazon page. 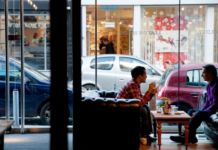