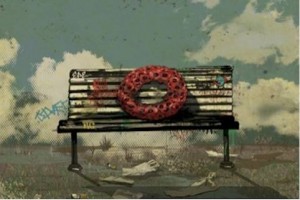 A Production by Rough&Ready Theatre Company

A young man comes back from war far away in a wooden box; he’s then glorified and called a hero. As the funeral plans are made in a small northern town in Lancashire, his siblings squabble over who he was and what they were to him.

The play is a blackly comic piece, with themes such as drugs, violence, neglect and apathy. It asks the question of ‘what you are willing to fight for?’ Gritty, loud and taboo, this modern piece will leave a lasting impression on its audience.

Directed by Chantell Walker, a local graduate from Liverpool John Moores University, she instantly fell in love with the play’s true grit and honesty. She believes it displays such pain and yet such hope, and can relate to the story, resulting in her direction being honest and from the heart.

Assisting Chantell in her direction is Tom Wilson, a Young Everyman Director who has directed various pieces, such as ‘The Bells’ with Hazard Theatre and ‘Hoof’ with the renowned company Spike Theatre. The cast includes Jade Thomson, a Young Everyman Actor who has performed in various pieces around the city over several years now. One to note is Bobby Moore, an actor who has burst onto the Manchester scene in plays such as ‘Great Expectations’ by 1964 Theatre Company and upcoming performance ‘Barbara the Zoo Keeper’ by Mediamedea Theatre Company. Cristina Carter, another actress involved has recently worked with Tell Tale Theatre Company in Liverpool and Rory Kelly who has worked with Oldham Theatre on a variety of projects.

Lantern Theatre Liverpool: The Rise and Fall of the Hamburger Queen