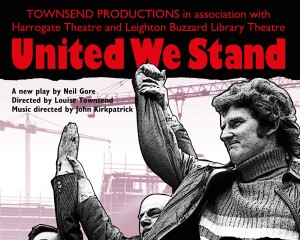 Following the success of ‘The Ragged Trousered Philanthropists’ and ‘We Will Be Free! – The Tolpuddle Martyrs Story’, Townsend Productions presents UNITED WE STAND by Neil Gore, a powerful new play based on the true story of one of the most tumultuous industrial battles – the 1972 Builders’ Strike.

In the 1960s and 70s the UK’s building companies were making millions re-building the country, but building workers faced the most dangerous working conditions and poorest wages of any trade. In the summer of ’72, for twelve weeks, 300,000 building workers launched their industry’s first national all-out strike to end cash “lump” wages and seek better pay by using the controversial tactic of ‘Flying Pickets’. The partial success of the strike, and the methods used, enraged the construction industry and government, and five months later culminated in the arrest of 24 builders in North Wales who were charged with offences including conspiracy to intimidate and affray. The “24” were prosecuted at Shrewsbury Crown Court in 1973 and three were jailed, including building workers Des Warren and Ricky Tomlinson.

Sharp and humorous, UNITED WE STAND tells the story behind the compelling dispute and dispels the myth, put about at the time, that the pickets were a criminally violent rather than ordinary working men seeking a better life for themselves and their fellow workers.

Combining Townsend Productions’ trademark small two-hander cast playing multiple roles, grand theatrical style and with popular and political songs about the strike arranged by renowned folk musician John Kirkpatrick, plus Ricky Tomlinson’s poems from his time in prison, the production aims to bring the full story of the compelling dispute to life in a powerful and thought-provoking new play.

The events surrounding the strike are still making headlines to this day, and forty two years on, the high-profile Shrewsbury 24 Campaign, led by picket turned actor, Ricky Tomlinson, is still seeking to overturn the unjust prosecution of the 24 building workers.

Lantern Theatre Liverpool: The Rise and Fall of a Northern Star