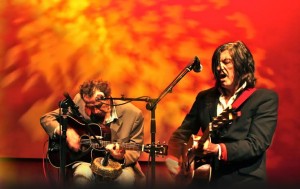 After a hugely successful appearance in 2013, the legendary Irish duo, Tir na nOg return to the Lantern Theatre.

Tir na nOg have been described as Alt Folk, Prog Folk, Psych Folk, and even Space Folk!. But the duo, formed by Leo O’Kelly & Sonny Condell in 1970, transcends all these categories. What is not in doubt is that they are two of the most original and influential songwriters and performers Ireland has ever produced.

Tir na nOg’s mesmerising live performances and extraordinary musicianship continue to amaze music lovers of all ages. The return to UK music venues in recent years is a most welcome revelation.

2014 will see the eagerly awaited release of new studio recordings – their first since 1973!

‘..a remarkable band…. they deliver a stunning performance that underlines their reputation as being well founded…… the crowd utterly entranced.’ – Prog Magazine

Lantern Theatre: Billy the Monster and Me

Lantern Theatre: Play With Myself: The Trials And Tribulations Of Drama...