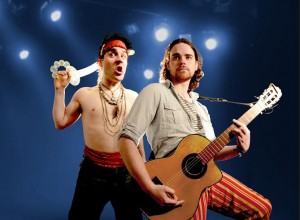 Details and ticket information as below

The brain child of Director Peter Mitchelson, Shiny New Festival was founded in 2012 following numerous trips to fringe theatre festivals across the UK. Mitchelson found that Liverpool’s fringe scene was almost non-existent and he and other artists had to go further a field in order to showcase new work. With this in mind Peter set up Shiny New Theatre.  Acting as an affordable platform for grassroots theatre companies and comedians to showcase their work to a homegrown audience, Shiny New Festival gives new companies a chance to gain valuable audiences feedback before developing their work further.

Originally a warehouse Lantern Theatre Liverpool was converted in to a theatre from rehearsal space in 2010. This family-run venture is a cosy and welcoming venue, lending itself to a variety of performances.  Acting a springboard to emerging artists in the city since 2011, the theatre has been home to Shiny New Festival since it began in 2012 and regularly collaborating with the company to produce new writing, most recently Because She Loved the Lion written by Laura Kate Barrow was produced in collaboration with the venue and Shiny New Theatre.

This years line up offers an eclectic mix of theatre and comedy from the North West’s finest emerging artists. Opening on Monday 14 July with three very different pieces of new writing and cramming everything from musical comedy to gritty drama in to the seven day festival.

Three generations of women prepare to say goodbye to a life that never was. Teenager Ellie cannot face the funeral but her mother Lorraine believes it’s a duty. When Lorraine’s mother tries to intervene, guilt and resentment from the past come to the surface and threaten to ruin Lorraine’s plans.

A first chance to see this new play previewed before it goes over to the prestigious Manchester based 24/7 Festival. Written by Mari Lloyd, Directed by Peter Mitchelson, Produced by Shiny New Theatre with the Support of the Lantern Theatre Liverpool

Two adoptive brothers. One of them is dead. Several years on – The younger of the two, now living out his life with his long-term girlfriend, still regularly visits his brother’s grave to seek his advice about life, love, and his lack of trust in others. You Boy is a fast paced and energetic drama that explores the significance of knowing who is important to you and that despite everything, trust is thicker than blood.

Written by former Everyman/Playhouse Young Writer Steph Dickinson and produced by Big Teeth and Writers LABB, Occupied focuses on two would-be burglars that break into a university but don’t expect to find it inhabited by student protestors. As the hours count down to the prime minister’s visit, friendships are made and lost, devotions tested, class war declared, and beans eaten in a comedy which pokes affectionate fun at political activism.

Special festival edition of the monthly comedy night with previews of several of the upcoming acts new shows along with some of Liverpool’s best alternative comedy. Hosted by Alastair Clark Doors 7 15pm Show 8pm Free But book early to avoid missing out on this

A musical misadventure written by and featuring, Keddy Sutton and Gillian Hardie. Scottie Road The Musical tells the story of Gillian Hardie and Keddy Sutton’s Pyjama wearing, Gregg scoffing alter ego’s – The inimitable-‘Caz n Britney’, and their life-changing journey from Primark to Prison. A heartfelt tale and homage to the wonderful world of musical theatre. Keddy Sutton and Gillian Hardie met whilst appearing together in Willy Russell’s remix of ‘Stags n Hens’, at The Royal Court Theatre Liverpool during The Capital of Culture 2008. They began verbally creating their own ideas within a 3cm radius of Willy’s earshot, eventually putting pen to paper, months later whilst at a  [failed] audition for one of Yvette Fielding’s ghosts (You couldn’t write it).

They continued to tour their material on the comedy Cabaret scene and their company ‘Caz n Britney present…’ became established. They were soon commissioned by Liverpool organisation ‘Homotopia’ to develop their act into a fully produced musical comedy, “ Scottie Road The Musical”, The show proved to be a sell out success at The Unity and Epstein Theatre, Liverpool and Brindley Theatre, Runcorn.

They went on to write and perform, (with the support of The Unity Theatre and Homotopia), their second sell out musical comedy  ‘Mis Les – A Revolution in Rollers’

Returning to Shiny New Festival for their third year, Jollyboat are comedy rock stars, as well as brothers. Jollyboat are a musical comedy duo whose high energy act is engineered to get comedy clubs and festivals roaring. Their fast-paced lyrics are packed with laughs, and there’s always something visual to see. Their fanbase grows with every gig.

“These boys are clever, know their audience, and have charisma and likeability in, well, boatloads.” (Fringe Review)

Chortle’s Student Comedian of the Year 2014 – Finalist. HOLY FUCK! Red Redmond is here. After a year of living alone, secluded in a 5th floor flat, Red is finally ready to venture outside. SORRY! He’s not great with people. In fact, he’s the sort of person who hides in the toilet at a house party just to get some alone time. Come down and witness an exciting and interactive mess from UK’s most unacceptable comedian. WARNING! Red is both charming and clinically insane.

“The most energetic man in comedy (provided Lee Evans is now dead” – Manchester Wire
“Red is truly a gem on stage. Warm, welcoming and deals with a punch in the face well” – FunnyFecker.co.uk
“An energetic and creative act…A specialist in ebullient improvisation Red is equipped with a quick wit and a dynamic physicality” – Square Hole Comedy

An hour of Stand-Up & sketches from a variety of folk who dwell within the North-West. The Good, The Bad & The Fugly. For a Fistful of £’s you can catch this gang of outlaws.

One morning in October 2013 Alastair Clark woke up, logged on to facebook and found that a lot of his friends had a new favourite politician… Russell Brand… The comedian.

The evening prior Brand had been on Newsnight encouraging people to stop participating in democracy. This made Alastair angry… So angry he wrote an Edinburgh show about how angry it made him.

Told through the subtly surreal story of a dream involving Nick Clegg in the guise of a neglectful husband, Alastair explores his own emotional relationship with politics and is left pondering the value of democracy.

Set in real-time, The Hacienda Tales invites it’s audience to eavesdrop on the conversations between strangers as they first meet on their way to famed Manchester superclub, The Hacienda. Pardsy, a drug dealing small-time criminal, awaits the arrival of his prey at a motorway service station and is greeted by Hacienda veteran Paul; newly-wed first timer Julie; her friend and closet drug addict Claire; and naïve student Edward. As the night winds on and tempers flare, the truths come tumbling out, illustrating the lengths people will go to in order to conceal aspects of their personality in favour of projecting an entirely different image of themselves.

It’s her word against yours. Except she’s a fifteen year old girl and nobody cares that you’ve done nothing wrong. The internet doesn’t turn to pulp like the daily papers. Some labels stick, even if they shouldn’t have been yours in the first place.

Multi-passes are available for each night of the festival offering entry to all three performances for just £16 Adult £12 Concession. Tickets can be booked online at www.lanterntheatreliverpool.co.uk or by calling 01517030000.