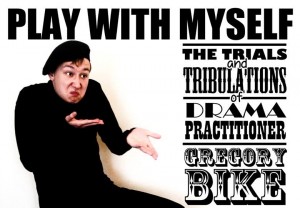 Character comedy focusing on a pretentious drama practitioner. The show parodies the world of theatre and features dead dogs, gypsy curses and an enormous buzz-saw.

Drama practitioner Gregory Bike invites you to witness a stage adaptation of the most important part of his life. Tasked with putting on a play Gregory not only has to write, direct, and act in his masterpiece but must also find love, avoid seeing his son’s presumably awful performances and avoid an early death at the hands of fairground attractions.

Having performed the characters at local comedy nights (including the Lantern’s own Shiny New Comedy Lab and the Playhouse/Everyman Theatre’s Scene Change) and after returning from their full run at the Edinburgh Fringe Festival, the Play With Myself team return to Liverpool for one last hoorah.