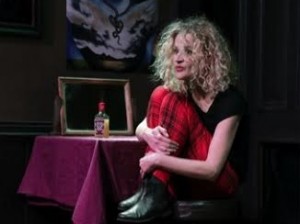 Stella Productions present: The Rise and Fall of a Northern Star
Written and performed by Stella Grundy
Directed by Iain Bloomfield

One-woman show The Rise and Fall of a Northern Star comes to Lantern Theatre Liverpool, offering a peculiar blend of comedy and tragedy interspersed with original music and rhythmic pacey dialogue.

Sex, drugs and rock ‘n’ roll – Tracy Star wanted it all! The Rise and Fall of a Northern Star is the cautionary tale of a rock and roll wannabe. Seeking to escape the drudgery of her day-to-day life in 1980s Manchester, she sought to make something of herself in the burgeoning male dominated Madchester music scene.

Tracy Star was ‘The Manc Madonna’ before life in the music industry took its toll. Written and performed by Stella Grundy, former front woman of Manchester band Intastella, the show offers a real-insight into the music industry.

The script was developed from nine original songs which formed the basis of a concept album and offers a peak into the darker aspects of the music business.