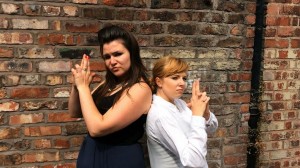 From the strange and brilliant mind of Brian S Charity – a graduate of the Everyman and Playhouse Young Writers’ Programme – comes a delightfully daft romp through the world of television and beyond, performed by some of the region’s best new comedy talent.

Bobby & Twenk. They’re detectives. Think Cagney and Lacey on very strong drugs. A child has run away. ‘The Case of the Runaway Child’—that’s what everyone’s calling it. With their careers and even their friendship on the line, can Bobby and Twenk find him before it’s too late—or at least before the end of the series?

Lantern Theatre: Play With Myself: The Trials And Tribulations Of Drama...