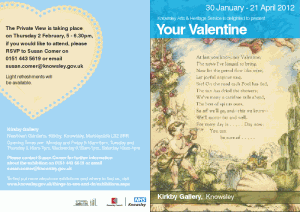 This exhibition will present a stunning array of Valentines Cards, as they used to be before the commercialisation of this national anniversary. On display will be 200 cards from ‘The Shell Advertising Art Collection’ and also a selection from ‘The Laura Seddon Collection of Valentine cards’,dating from the early 19th to the early 20th centuries, on loan from The Manchester Metropolitan University Special Collections.

Shell’s interest in Valentine cards began in 1938 with the innovative idea of sending Valentine greetings to lady customers. The cards were designed by artists of the day and carried witty jokes and rhymes on motoring andpetrol themes. A Shell Valentine card was not an advertisement for the company and never revealed the identity of the sender.