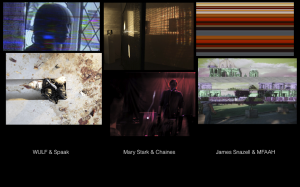 Video Jam has swiftly become an indispensable part of the arts and experimental events culture in the North West and beyond, providing an accessible critical forum for dialogue surrounding live sound and moving image. We are committed to creating engaging, progressive and site specific events that seek to promote cultural exchange, support the development of pioneering artists, forge dynamic partnerships and challenge conventional ideologies within these two medium. The collective was borne out of a desire to identify and promote emerging and marginalised film and sound artists that lack representation, and continually seeks to showcase relevant work of excellence within non-commercial fields to ever expanding new audiences. Whilst our priority is to programme the most exciting and interesting work we can find, our emphasis is always on inclusion and variety.
SPACES sees film/music collective Video Jam and experimental record label Slip Discs join forces in commissioning a series of new audio/visual pieces from an emerging generation of distinctive British artists.

Over a series of three UK wide events, three collaborative works from three pairings of emerging filmmakers and musicians will be presented as site-specific events featuring accompanying material curated specifically to explore each individual context.The project encompasses Video Jam’s objective to explore and reconsider the relationship between moving image and live sound and Slip Discs’ continued commitment to carefully curating records and events that support the next generation of idiosyncratic music makers. Together, both organisations act as the go-between, inviting these three unique pairings to each create a new, third entity to be witnessed as a live experience. The series compiles a variety of distinctive methods of working and approaches to sound and image from each pairing which illuminate one another, allowing the two organisations to make their most comprehensive and far-reaching statement to date. 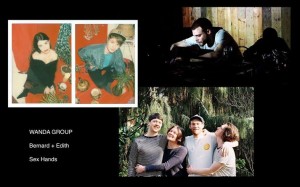 Mary Stark’s practice an artist, filmmaker and photographer is led by a hands-on exploration of analogue film as a sculptural material. Her interests lie in the physical photographic nature of film as a measurement of time and space, and an ephemeral projection of light and sound. Mary’s obsessive yet exuberant practice using 16mm film is paired with the hallucinatory work of Chaines, who constructs strangely compelling layers of synthesizer, freakish vocals and home-made instrumentals. Especially important in her work is a sense of narrative drive, brought about by overarching linear structures that take the listener through a range of emotions and sensations.Having debuted their collaborative relationship as part of the closing event for Turner Prize winner Jeremy Deller’s exhibition, All that is Solid Melts into Air in January 2014, both artists are focussed on new ways of engaging with the performance of their chosen mediums through physical, instrumental and sculptural interface.

Joe Snapeʼs work makes use of household objects and highly defined electronic sound to dazzling effect. Having toured extensively in the US, Europe and the UK with a lightbulb show entitled Lärmlicht, he joins forces under his new Spaak moniker with 4 members of WULF, a Manchester/London-based network of 8 like-minded and distinctive artistic voices, who have developed an award-winning collective comprised of producers, writers, directors, animators, editors and photographers united by a desire to innovate and pioneer the future of film through a strong commitment to collaboration. The artists representing WULF, each working on individual films to be viewed as a single body of work, are screenwriter and filmmaker Scout Stuart, animator Tom O’Meara, photography and cinematographer Paul Daly and film director Sing J. Lee.

With such a large number of contributors the collaboration constitutes a mini-series in itself. The pair both hold strongly distinctive creative and curatorial values with a wealth of experience spanning performance art, instrument building, and experimental collaborative work at their cores.

James Snazell is a senior lecturer at Edge Hill University in Liverpool and a video artist and animator who produces work for single screen and installation. With a particular interest in abstraction and the built environment, he creates motion graphic short films using photographs to explore urban rhythms through visual and audio montage. James is paired with MFAAH (Max Hampshire), a recent philosophy graduate from the University of York. MFAAH’s interests in audiovisual work derives from the relationship between material synthesis and re-appropriation.

James and MFAAH are united by their ability to derive complex and affecting work from the rawest of sources. Both artists start from the essentials of their medium, with Snazell allowing the physical properties of film to inform his hypnotic and abstract work and MFAAH atomising electronic sound within compositions increasingly incorporating bursts of analogue warmth.

WANDA GROUP
www.alienpaint.tumblr.com
WANDA GROUP treads that obscure line between rhythmic electronica and sound art with more obliquity and devilish charm than most. A 4/4 heartbeat intermittently struggles to fight through the beautiful murk of Louis Johnstone’s cuts and pastes but inevitably surrenders to the beguiling displacement of his assembled found/stolen sounds and passages that flit between gratuitous bass throbs and just a chance to revel in the sound of a stylus skating over vinyl.
BERNARD + EDITH
www.soundcloud.com/bernard-edith
Manchester based Girl Boy 1+ 1 piece creating brooding soundscapes for intimate environments. Inspired by Landscapes, Beats and Cute Puppies.SEX HANDS
www.fauxdiscx.bandcamp.com/album/pleh
“Sex Hands are not a garage pop band. They have never practiced in a garage. They never practice…”
+ DEEP HEDONIA AV AFTERPARTY
www.deephedonia.com
Deep Hedonia is a productions agency based in Liverpool specialising in experimental electronica. Bringing together the finest underground artists they host events and clubnights, commission new work and create bespoke audiovisual performances.
DJs to be announced.