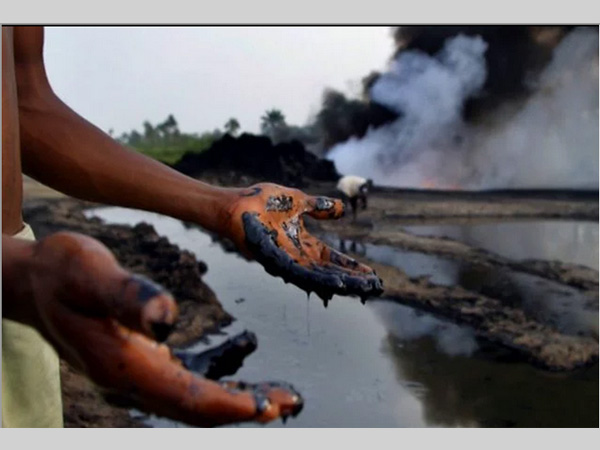 From April 2015 – Until Further Notice

The effect of the oil industry
For more than five centuries the fortunes of the Niger Delta, a southern region of Nigeria in West Africa, have been closely tied to those of the global economy: from its slave ports, then palm oil industry, through to the discovery of crude oil in the 1950s.

Oil multinationals soon came to the fore, working in alliance with a local elite to strip the region of its wealth. Since then over 400 billion US dollars of wealth has been pumped out of the fertile grounds and remote creeks of the world’s third largest wetland.

The region’s impoverished inhabitants have been left with a poisoned environment caused through uninterrupted gas flaring and oil spillage, which has devastated traditional livelihoods. They are also at the mercy of a government that does not care, and the victims of rival armed militant groups laying claim to this oil-rich land.

Human tragedy revealed
The ten photographs in this exhibition explored the realities of daily life along the Niger Delta. They were accompanied by a slideshow featuring a further 200 images from George Osodi’s work. Sometimes graphic, they revealed the human tragedy and ecological destruction being visited on the Niger Delta and its people.

“It is amazing how people carry on with their lives, with their daily routines against all odds. I want to put a human face on this paradise lost. I do not wish to offend, but to draw the viewer near my images in order to provoke a feeling and be inspired or trigger a deep sense of change within the observer.” George Osodi
Osodi’s work carries on the cause of Nigerian author, activist and member of the Ogoni people, Ken Saro-Wiwa, who fought against the oil giants and the Nigerian government for the rights of the people.

“To take away the resources of the people and refuse to give them anything in return is to subject them to slavery.” Ken Saro-Wiwa

George Osodi
George Osodi was born in Lagos in 1974. He worked as a photojournalist for the Comet Newspaper in Lagos from 1999 before joining the Associated Press News Agency in 2001. He has covered many assignments for international media including the New York Times, The Guardian and USA Today. In 2004 he won First Prize in the Fuji African Photojournalist of the Year award. His photographs have been exhibited in museums around the globe.

The International Slavery Museum: Their Spirits by Laura Facey