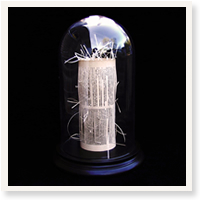 For the Love of Books: Huyton Gallery, Knowsley

The usual understanding of the term ‘artists’ books’ is influenced and typically known by popular works illustrated by artists. Books by artists today provide a challenge to great works of the past, as well as being an increasingly popular way in which artists explore the fusion between image and text, graphics and physical form. The conventional book, a Roman invention which became a household article after the invention of printing, has only recently been rivalled by the computer screen and electronic text. The works in this exhibition take on a variety of formats, from bound volumes and photographs to sculptures and installations, referring to the myriad functions of books besides transmitting texts. This exhibition seeks to demonstrate our love of books that still exists for their traditional form, as well as that of artists’ playful re-working of the book into a new work of beauty. On show will be works from key historical authors and an array of makers of artists’ books. The exhibition is timed to coincide with the Bicentenary of Edward Lear’s birth on 12 May 1812. His famous illustrated Nonsense Alphabet was created during his time at Knowsley Hall. Knowsley Arts & Heritage Service has commissioned an enormous Public Art project led by artist Gordon Young working with the community to create a new Knowsley Alphabet to celebrate Lear’s ‘Book of Nonsense’, written for the Earl of Derby’s grandchildren. All of these public artworks can be seen in the new Knowsley Leisure & Culture Park on Longview Drive, Huyton. Location: Huyton Gallery / Library, Civic Way, Huyton, Knowsley, L36 9GDOpening times: Monday & Friday: 9.15am – 5pm, Tuesday, Wednesday & Thursday: 9.15 – 7pm, Saturday: 10am – 1pm.