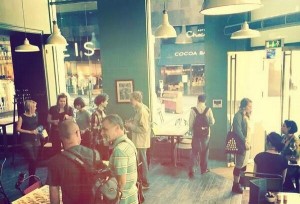 Katie Craven is a comic book artist whose intricate and playful style of illustration is steadily gaining her a dedicated following both at home and afar. Having exhibited her first solo exhibition at the much loved (and missed) Drop The Dumbells on Slater St last year she also published her own comic Angus & Felix. A sombre exploration of our species and current situation as viewed from the perspective of a pair of strange beings from a magical land. The first of many no doubt.

Occasionally Katie paints with the mischievous and camera shy Tomo, whose work veers somewhere between graffiti and the more accepted circles of fine art. His work has been spotted both on and off the streets of Liverpool for some time yet it doesn’t clamour for attention, often being painted in forgotten or out of the way places where people seldom visit. Notably Tomo won The People’s Choice Award at The Liverpool Art Prize in 2012.