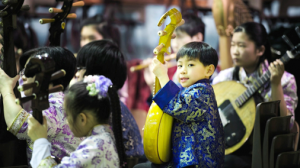 In 2010 they performed with the Royal Liverpool Philharmonic Orchestra at the Shanghai World Expo, and now they are coming to Hoylake for a short concert. Featured in their concert will be the Guzheng (Chinese) harp ensemble, led by Zi Lan whose playing has been described as expressive, powerful and stunning.