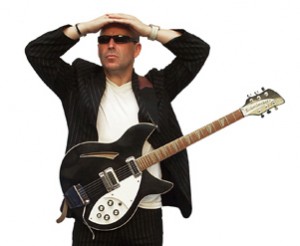 Sharp-tongued poet, musician, writer, TV presenter and performer, Keith is colloquial, razor sharp and erudite. Lyrically smart, his words are drawn from life’s warp and weft and his music straddles an art-rock backdrop somewhere between Zappa’s improvisation and the The Bonzo Dog Band’s post-music hall vibe. His live work constantly shifts between stand up and stand out – as a headline act (both solo and with his band) he is much travelled and during a hailstorm of former lives has opened for numerous acts including the Jam, Buzzcocks,  Ultravox, the Police, Big Country, Steve Marriott, Nik Turner, Paul Weller, Elvis Costello, the Damned, Blondie, the Stranglers, Joe Strummer and Billy Bragg.

Born in Liverpool, he has worked extensively throughout the UK and Europe and there is no doubt he has absorbed more than his fair share of the natter, patter and chatter synonymous with his birthplace. A regular on TV and radio, he has been nominated for two Royal Television Society Awards and has just written and scored a promotional film for the new BT Channel to be broadcast on August 1. He has written extensively for TV, film and theatre and his words and music have featured in numerous commercials.

Keith is a regular contributor to the Billy Butler Show on BBC Radio Merseyside and a new spoken word album containing the best of these broadcasts is due for release in July.