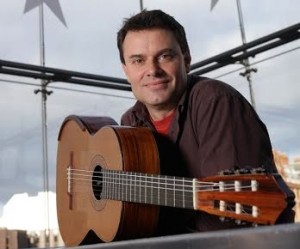 Australian born Craig Ogden, described as one of the most exciting artists of his generation, will give a recital in Hoylake Chapel. Craig is one of the world’s finest guitarists with a laid back, effortless and naturally skilled approach to playing guitar. Few guitarists have managed to produce the beautiful sound that Craig does so effortlessly, nor have his natural connection to audiences around the world.

Craig’s many recordings for Virgin/EMI, Chandos, Nimbus, Hyperion, Sony and Classic FM have received wide acclaim. Ogden’s Classic FM albums The Guitarist and Summertime both shot straight to no.1 in the UK classical chart in summer 2010 and 2011 respectively. Craig Ogden has performed concertos with all of the main UK orchestras plus many abroad and has presented on BBC Radio 3 and on ABC Classic FM (Australia).

When Craig is not performing in major concerts and recitals all over the world, he is Principal Lecturer in Guitar at the Royal Northern College of Music in Manchester and Visiting Lecturer at London’s Royal College of Music.
www.craigogden.com/

Hoylake Chapel, that iconic grade 2 listed building on Hoylake Roundabout, with the fantastic acoustics, is the venue for some amazing music and poetry during this year’s Festival of Firsts.