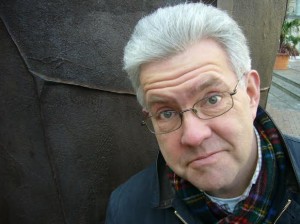 Also known as the “Bard of Barnsley”, Ian McMillan, the UK’s favourite poet-comedian, and a regular on radio and television, brings his brilliant show “Talking myself home” to Hoylake Chapel. He can “bring a smile to a banana!”.

Described by Poetry News as an “inspiring figure, an encouraging & democratic spirit, a strong & popular poet and one of the funniest people in Britain”, Ian is a great entertainer, who combines  “the verbal gymnastics of a north country Spike Milligan … with the comic timing of Eric Morecambe” (Frome Festival).

Ian is poet-in-residence for The Academy of Urbanism and Barnsley FC. Previously he was resident poet for English National Opera, UK Trade & Investment Poet, Yorkshire TV’s Investigative Poet and Humberside Police’s Beat Poet. He presents The Verb every week on BBC R3 and he’s a regular on Coast, Pick of the Week, You & Yours, Last Word and The Arts Show. He was recently castaway on Desert Island Discs and featured with his Orchestra on The South Bank Show. Cats make him sneeze.
www.ian-mcmillan.co.uk