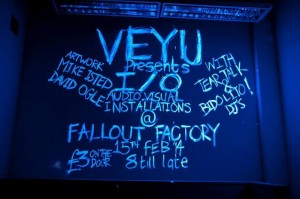 This unique evening of entertainment, taking place at a venue that that supports and promotes emerging artists through exhibitions, commissions and residencies, will be an overflowing collaboration of Merseyside’s creative talents.

The I/O (input/output) night will feature:

– Digital visuals from creative studio, Deerstalker (responible for a host of music videos that include Muse’s “Madness” and Beady Eye’s “Soul Love”).

– DJ Sets from Bido Lito! spinning, what they intriguingly describe as “Albanian funk and catastrophic gypsy tape throb” throughout the night.

– Performances from Tear Talk – a four piece band from Liverpool that combine disparate elements of both post-punk and shoegaze – and of course, VEYU who will cap off the evening with a set that includes the likes of Running, which Peter Guy (Liverpool Echo, GetIntoThis) called ‘the number one track released by a Liverpool band in 2013’.

All this will be taking place at the emerging venue, Fallout Factory, on Dale Street in the city centre. Guided by its passion to nurture the creative process through a network of peers and resource sharing, Fallout Factory functions as a space and gallery for the creation and display of artwork.