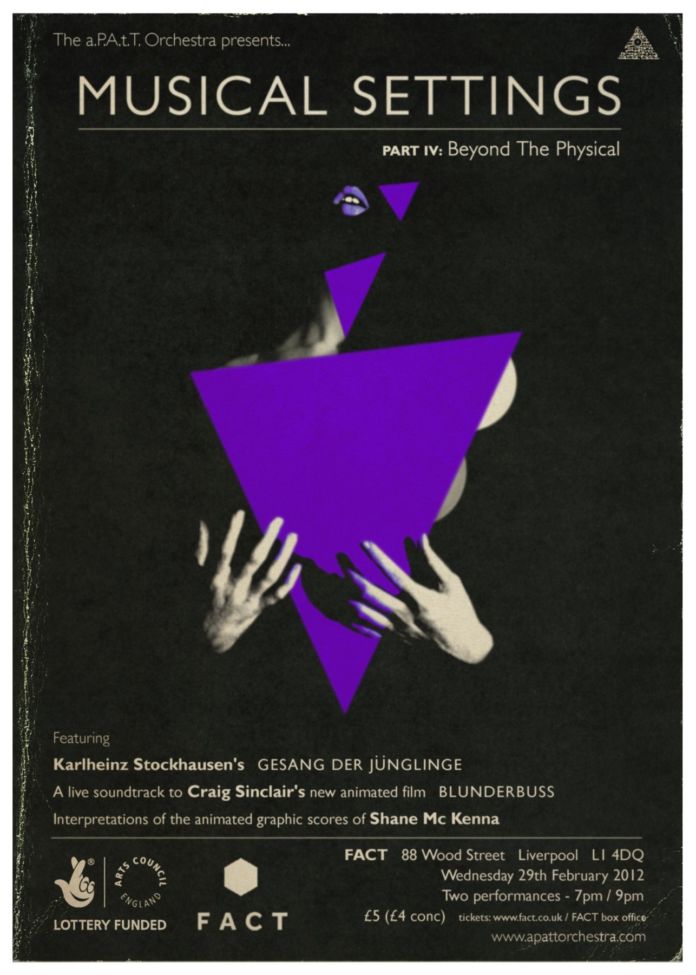 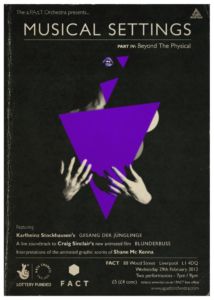 The a.P.A.t.T. Orchestra is an inclusive, large scale ensemble of non-specific instrumentation that performs time and place-specific music and cross art-form collaborations in unusual settings, and uses the architecture of each venue to inform composition and/or performance. Previous a.P.A.t.T. Orchestra events have seen collaborations with Tate Liverpool, the Royal Liverpool Philharmonic, Liverpool Biennial, National Museums Liverpool and the Walker Art Gallery.
The Orchestra is one of the many diverse projects originating from the unusual musical unit known as a.P.A.t.T.

Musical Settings is a 4-part concert series that looks at the ways in which different natural and architectural environments can influence composition, performance and reception of new music.
Part 1: On the Earth, saw the orchestra examine the tranquility of rurality, with performances of works by Alan Courtis and Cornelius Cardew in Sefton Park, Liverpool.
Part 2: Into the Deep, focused on distance and isolation, with performances in Liverpool World Museum’s aquarium and planetarium, and a special collaboration with Ex-Easter Island Head.
Part 3: Beneath the Ground, explored notions of depth and resonance, and featured the world premiere of Hope Street Melodies, a new work by Howard Skempton commissioned by the a.P.A.t.T. Orchestra.

The fourth and final instalment of the series – Part 4: Beyond the Physical – explores, on a date that only comes into existence once every 4 years, those areas where the audial and the visual collide, and where the experience of music passes away from that which is purely created by the human mind and body, and into the realm of technology and manipulation.

Interpretations of the animated graphic scores of Shane Mc Kenna
Shane Mc Kenna is a music maker and music teacher based in Dublin, exploring the use of non-traditional notation to create musical collaboration. During his studies, Mc Kenna investigated the use of graphic notation in music education and in contemporary music, resulting in the creation of a system of animated graphic notation for live performance. Animated graphic notation consists of moving shapes and symbols which suggest musical ideas or gestures to be interpreted by a performer or performers. Having worked with amateur and professional ensembles including the New Dublin Voices and The National Youth Orchestra, Mc Kenna will now work with the unusual instrumentation of the a.P.A.t.T. Orchestra to create some startling reactions to his works, presented on the cinema screen in The Box. Shane Mc Kenna will be present at the performance, and will give a short talk to introduce his work.
www.shanemckenna.com

A live soundtrack to Craig Sinclair’s animated film Blunderbuss
An oppressed office worker takes a trip into a bizarre and frightening hollow earth where mystic forces conspire to change the surface world – but will it be for better or worse? Fire the celestial truth-giving Blunderbuss and find out!
Inspired by side-scrolling ancient Japanese computer games, Powell and Pressburger, Oliver Postgate and Franz Kafka, this short animation by creative maverick Craig Sinclair has been especially created for this event and will mark the a.P.A.t.T. Orchestra’s first foray into film soundtrack.

Karlheinz Stockhausen’s Gesang Der Junglinge
Karlheinz Stockhausen (22 August 1928 – 5 December 2007) is widely acknowledged by critics as one of the most important composers of the 20th and early 21st centuries. He is known for his ground-breaking work in electronic music, and musical spatialization.
Gesang Der Junglinge (Song of the Youths) is a pre-recorded electronic piece, played back through a 4-channel speaker system. It explores the idea of reconciling sung sounds with those which are electronically produced. The piece is genuinely groundbreaking in that it presented a new way of experiencing musical language and a new dimension in musical experience.
The playback of Gesang Der Junglinge will be preceded by an introductory talk from Matthew Fairclough, a noted composer, performer and sound designer specialising in Acousmatic music, and Lecturer in Music Technology and Electronic Music Composition at the University of Liverpool.
www.stockhausen.org

The a.P.A.t.T. Orchestra are always looking for new members – we welcome any instrument, any background, and any ability. To join us for a future concert, email apattorchestra@apatt.com

Supported by the National Lottery through Arts Council England

FACT: Tales of the Grim Sleeper: The Story of a Serial...