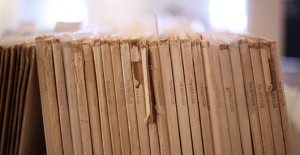 FACT and Liverpool International Music Festival (LIMF) have joined forces to present this incredible, obsessive vinyl project by New York based artist Rutherford Chang. Chang’s mission is to travel the world buying copies of The Beatles’ White Album, which he displays in exhibition spaces. This year, Chang travels to Liverpool to expand his collection of over 1,000 first-pressings of The Beatles’ White Album.

We Buy White Albums will be shown in a pop-up space close to FACT (FACT’s loading bay space on Wood Street), with Chang in residence to discuss the project and buy even more versions of the album from visitors.

The seminal White Album – officially titled The Beatles – was the band’s ninth studio album, with a revolutionary cover designed by pioneering pop artist Richard Hamilton. Famously stark, the totally white design has provided a blank canvas for the coffee stains, doodles, mold and rips that have accumulated on the albums since its release in 1968, making every copy now unique.

Chang’s entire collection of White Albums will be displayed in the format of a record store with two vital differences, only one album is displayed, and records are only bought not sold. Visitors will be invited to browse and listen to copies of their choice. He will also be selling his own version of the White Album, made by layering 100 copies over one another in both the audio, and the design of the covers: showing how very different the same LP can be.

This will be the project’s debut in the UK and will coincide with International Beatleweek (20 – 26 August) when there will be special events programmed in and around FACT including acoustic performances in RopeWalks Square.

The exhibition launches with live music curated by LIMF on 15 August. The lineup includes: