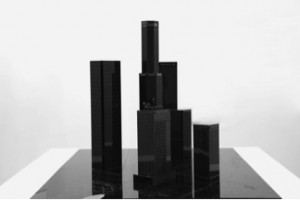 An exciting pop-up exhibition Under Black Carpets, comes to the FACT Connects space, where artist Ilona Gaynor, in collaboration with the FBI and the Los Angeles Police Department, has created an intricate crime investigation of a fictional bank robbery in Los Angeles.

Visitors are offered a unique opportunity to put their detective skills to the test by forming their own version of what has happened, based on evidence created by Gaynor. The materials include satellite photos, scale figures of witnesses, hostages and bistanders, as well as architectural scale models of Downtown Los Angeles, vehicles and weapons.

Proof of our growing interest in detective work and forensic investigations is everywhere to be found in popular culture. Countless TV shows, films and the hugely successful podcast Serial, where each episode reveals clues from a real criminal investigation, let us participate in the solving of crimes from the comfort of our living rooms. But how successful would we be in a real investigation?

A set of activities accompanying Under Black Carpets invite participants to assume the role of jury and investigator, engage in the practice of fabricating evidences as well as 3D print and keep an object resulting of their personal investigation. This gives a rare, hands on insight into how forensic interpretations of DNA samples, 3D scans, satellite surveillance and other scientific methods or instruments play a key part in crime investigations. Workshops will be held on 22, 23 and 24 January concurrent with gallery hours.

Gaynor also highlights how items are used similarly in the cinematic genre of bank robbery, and how it is possible to create evidence for a crime that was never committed within both fields.

By exploring the relationship between architecture and law, crime and forensics through the perspective of pop culture and the American legal system, Gaynor encourages us to take our interest in forensics one step further.