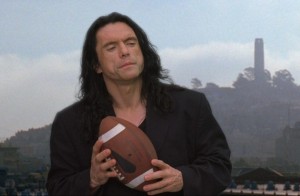 He’s back! Tommy Wiseau is returning to Liverpool with his celebrated cult ‘masterpiece’ The Room.

Director Tommy Wiseau, who also produced, wrote and starred in the film, will be here to present the screenings and hold a signing session.

He will also show his first creative project since The Room, a TV pilot for new show The Neighbours which he also directs, writes and stars in, on the night.

Read the (interactive) viewer’s guide to The Room.