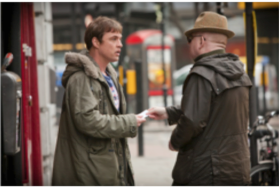 British comedy rock and roll drama, Svengali, returns to cinemas this summer for selected screenings followed by a Q & A with Creation Records founder, Alan McGee, who plays himself in the film.

An influential figure in the music industry, McGee has managed and signed some of the biggest names in British music, including The Jesus and Mary Chain and The Libertines, who both feature in the film’s soundtrack. Most notably under McGee’s direction, Oasis rose to become one of the world’s biggest Britpop bands. Svengali tells the story of Dixie (Jonny Owen), a postman and music fanatic from South Wales. All his life, he’s dreamed of discovering a great band and then one day, trawling through YouTube, he finds them… ‘The Premature Congratulations’ (a.k.a. ‘The Prems’). Accompanied by his long-term girlfriend, Shell (Vicky McClure), Dixie leaves the Welsh valleys and chases his dream to London, where he must convince the band he’s the man to help them hit the big time.

Dixie soon begins to put his ‘golden ears’ to use and ‘The Prems’ start to get noticed by cutthroat music labels and iconic industry figures, including Alan McGee. Is Dixie’s newfound success and recognition all it’s cracked up to be?

Svengali was first released in cinemas in March this year and screened at the 67th Edinburgh International Film Festival 2013 where it competed in the prestigious Michael Powell Award. The feature film was borne out of the success of the popular Svengali series of 5 minute webisodes.

HACKY BIRTHDAY to FACT Bringing people, art and technology together since...