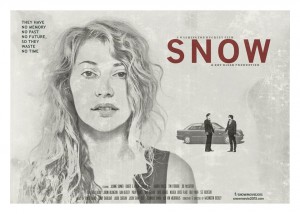 Kendrick and Dylan’s journey is both intently focussed and dreamlike, taking them not only across Liverpool but also through their own consciousness.

They first meet on a hillside, journey to Liverpool in a car they have to deliver to the enigmatic Coffeeman at Priory Road, crossing Liverpool as almost an alien landscape, they get lost. Dylan meets a girl called April who claims to know the way who now joins them. This upsets Kendrick’s plans, who increasingly becomes more paranoid and suspects the girl’s motives, whilst being intrigued by her. They eventually make it to Priory Road which now is called Bridgehouse, where they meet the Coffeeman who alludes to something missing from the car, events become increasingly surreal and sinister.

The film was shot on location in Liverpool. There was a deliberate use of spontaneous and accidental events which occurs throughout film – the general public and the urban landscape of Liverpool became a characters in the film.

Find out more / Watch the trailer