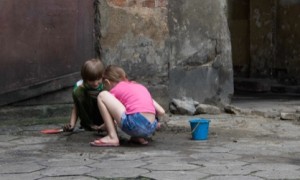 FACT and Liverpool Biennial are proud to present the first UK solo exhibition by Los Angeles-based artist Sharon Lockhart. It features existing works alongside a newly commissioned film which will be produced during Liverpool Biennial and premiere at FACT on 17 October.

Known for creating film and photography  portraying often overlooked subjects in everyday life, Lockhart’s practice is underpinned by a commitment to immersing herself in new environments and building intimate relationships with people and places.Perhaps the most significant of these is her friendship with a young Polish girl Milena, with whom she has formed a continuing collaboration, three separate aspects of which will be shown at FACT.

Lockhart first met Milena whilst creating her film Pódworka (2009), which will be presented in FACT’s Gallery 1. This film explores the courtyards of Łódź, Poland, and the children that inhabit them as their playgrounds, their imaginations turning parking lots, storage units, and metal armatures into jungle gyms, sandboxes, and soccer fields. Nine years old at the time, Milena inserted herself into the film’s making with Lockhart describing her as “a sort of impromptu assistant director, instructing the other children where to stand, what to do, and where to move within the frame.”

Milena’s strong character was immediately noticeable to Lockhart who appreciated her energy and strong will, aspects of her personality that have not diminished since their first meeting. Since filming Podworka, Lockhart and Milena have formed a friendship resulting in several projects that span several media. Two separate photographic projects will be presented in the exhibition as well as a text-based work and a new film commissioned by FACT, Liverpool Biennial and Kadist, San Francisco.  These comprise Lockhart’s latest collaboration with Milena, who is now fifteen years old and living in an orphanage near Warsaw.

Inspired by her research into the work of the influential Janusz Korczak – whose seminal essay The Child’s Right to Respect analysed the role of adults and the place of children in society – Lockhart has partnered with Polish pedagogue (specialist in the education of young people) and philosopher Bartosz Przybyl, co-author of the schoolbook Philosophical Education and Critical Thinking. For the month of June, Lockhart will live on a farm close to the orphanage with a small production crew and a group led by Przybyl, including Ola Knychalska and Wojtek Markowski.  12 girls (aged 14 – 17) from Milena’s orphanage will attend philosophy lessons, discussions and dinner at the farm. This educational residency intends to encourage thinking around life’s big questions and celebrate the often-disregarded voice of the child.  Lockhart and will be using this process of aquiring a collective voice as gist for the new film premiering at FACT on 17 October.

“During the course of the Liverpool Biennial, my intention is to create a forum for children that allows for their voices to be heard.” explains Lockhart, “Through this film as well as the events that it documents, I hope to encourage a world for children that emphasizes ownership, openness, and freedom in speaking.”

The show is part of the 8th Biennial Exhibition A Needle Walks into a Haystack curated by Mai Abu ElDahab and Anthony Huberman.

It will be accompanied by a series of films selected by the artist exploring themes of children’s agency and selfhood as well as special events, talks and workshops still to be confirmed.