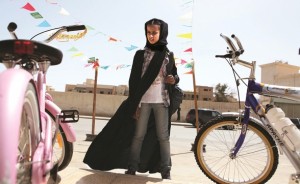 The first Saudi Arabian feature to be directed by a woman, shot in the suburbs of Riyadh, Haifaa Al-Mansour’s film tells the story of an 10-year-old who wants to buy a green bicycle to race against her friend Abdullah.

Part of the Sharon Lockhart curated film programme to accompany the Liverpool Biennial exhibition at FACT.