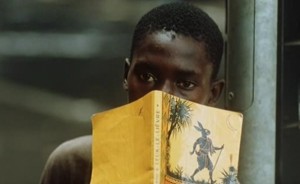 Sili, a crippled Senegalese girl, decides to do a boy’s job, selling newspapers on the streets of Dakar. She’s great at it, but the boys aren’t happy. Sili doesn’t care, and dances in a dress the colour of sunflowers. Djibril Diop Mambety’s little film is a big-hearted odyssey about daring to imagine what you can be, and to hell with what anyone else thinks.

Herz Frank’s seminal short film has to be seen on the big screen. Storms of emotion sweep across a child’s face as he watches a puppet show, which we never get to see.

Filmmaker Mark Cousins, who included this in his own programme of the representation of childhood in cinema, says of the short: “It’s only ten minutes long but it’s like looking at Constable’s beautiful paintings of clouds.”

Part of the film programme curated by Sharon Lockhart to accompany her exhibition as part of Liverpool Biennial 2014.

FACT: From Yu To Me Film Screening – UK Premiere