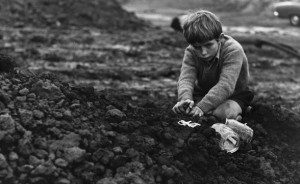 Bill Douglas’s reputation as a film director rests largely on three films he made in the 1970s, the total running length of which is only just over three hours.

My Childhood (1972), My Ain Folk (1973) and My Way Home (1978) provide a painfully intense picture of a harsh upbringing marked by poverty, isolation and the complex family background of a boy who only gradually discovers that his father is the man who lives down the road and that his mother is in an asylum.

All three films were closely modelled on the director’s own experiences and memories. They were largely filmed in Newcraighall, the mining village on the outskirts of Edinburgh where Douglas was born in 1934, and where he spent his childhood.

Fiercely unsentimental, often bleak, and making sparse use of dialogue and camera movement, the films also include moments of exhilaration. One such moment occurs at the beginning ofMy Ain Folk, when a visit to the cinema allows a brief splash of Technicolor, differing sharply from the otherwise dominant grainy black-and-white.

Douglas later described the cinema as “my real home”, writing (in Palace of Dreams) of the magical contrast it offered to the outside world where “whether in the village or the city, whether I was seven or seventeen, it always seemed to be raining or grey.”

Part of the film programme curated by Sharon Lockhart to accompany her exhibition, part of Liverpool Biennial 2014.

FACT: The Pervert’s Guide to Ideology