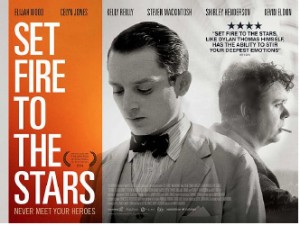 Wirral based actor and screenwriter Celyn Jones will come to Picturehouse at FACT next week to talk about his new film Set Fire To The Stars.

Based on true events, the film is set in the 1950s and tells the story of the turbulent relationship between aspiring poet John Malcolm Brinnin, played by Elijah Wood, and the enigmatic hell raising Welsh poet Dylan Thomas, played by Jones.

The script was co written by Jones and director Andy Goddard, who is known for his directorial work on shows like Downton Abbey and Doctor Who. The film was shot on location in and around Thomas’ spiritual home of Swansea, and Welsh musician Gruff Rhys (of Super Furry Animals) recorded the soundtrack.

Jones joins an illustrious group of actors who have played the Welsh poet, including Alec Guinness, Matthew Rhys and Tom Hollander.

After the screening, the audience will have the chance to ask him questions about the film, its’ script and his stunning performance.

You can find the trailer for the film here: https://www.youtube.com/watch?v=iLParAx7vU

Fact: The value of local people in placemaking