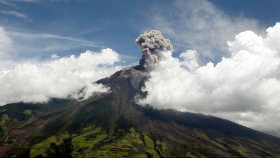 1 July – 11 September 2011 at FACT. ‘Semiconductor: Worlds in the Making ’
FACT (Foundation for Art and Creative Technology), Liverpool presents the first major solo exhibition of Semiconductor, aka Ruth Jarman and Joe Gerhardt. The British artist duo has earned critical acclaim for short films, including Magnetic Movie broadcast on Channel 4, as well as exhibitions at the Venice Biennale, and The Royal Academy, London.  Combining film, scientific data, performance and animation, Semiconductor make moving image works, which explore the material nature of our world and how we experience it.

Worlds in the Making is an ambitious exhibition inspired by the artists’ travels to the volcanic regions of the Galapagos Islands and mainland Ecuador in South America. Working closely with volcanologists and scientists at the Smithsonian Mineral Sciences Laboratory, Semiconductor has created a series of installations that transport the viewer through dystopian landscapes, strangely exquisite animation and archive volcanology footage, to a world between science fiction and science fact.   The exhibition features the UK premiere of Worlds in the Making, an epic three-channel installation bringing together landscapes of active volcanoes. Blending real footage of volcanologists at work with animation and layered audio from field recordings, interviews and seismic data, it creates an imaginary understanding of the physical, conjuring up images of the earth’s distant past.

Also premiering is The Volcano Film Archive. Using a 16mm volcano film archive unearthed at the Mineral Sciences Laboratory at the Natural History Museum in Washington DC, the artists have created a multi-channel exploration of our complicated relationships with natural phenomena. The installation reveals spectacular occurrences and the curious, obsessive and sometimes absurd process of observing these extraordinary phenomena.

In the Mineral Crystal Animations, three video installations depict jewel-like animations of mineral crystals. The movement and growth of these imagined formations respond and react to sound recordings of melting ice.

The exhibition at FACT includes a collaboration and new commission with multi-instrumentalist, Oren Ambarchi.