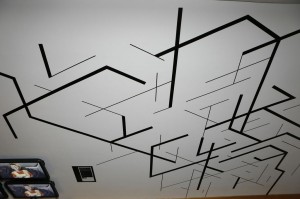 Inspired by the work of J.G. Ballard, our story looks to the bleak, man-made landscapes of the future and asks: What happens when virtual environments become indistinguishable from reality? Will our global culture allow us to choose where to live, and who will stop us? What will we do with knowledge that becomes freely available to all? With social platforms acting as camera, how will ‘selfies’ develop and what new forms of narcissism will thrive? What is it that we need to preserve, and what do we need to change?

Since 2010, at least twenty British citizens have had their citizenship revoked by the Home Secretary, leaving them stranded outside the country, at the mercy of foreign governments, in a state legal experts describe as “akin to medieval exile”. James Bridle’s new installation A Privilege, Not a Right walks the viewer through the process and consequences of contemporary exile, and the experience of those subjected to it.

The European premiere of Main Squeeze, a video project by Jon Rafman explores the relationship between memory and identity. Rafman has sourced provocative online footage which will be presented in a dystopian, domestic landscape resembling an extreme version of a bedroom gamer’s private residence.

The UK gallery premiere of Ryan Trecartin and Lizzie Fitch’s video short story Tommy-Chat Just E-mailed Me is an intense visualisation of electronic communication, inhabited by a cast of ultra stylised characters all played by Trecartin. Moving from person to person – like a browser surfing through Web pages – the characters become increasingly isolated despite their manic electronic interactions.

Karen Mirza and Brad Butler will premiere a new cut of Deep State, a 41 minute film scripted in collaboration with China Miéville. Developed while on residency in Cairo, Deep State captures the energy of dissidence and uprising during which a raised fist or a thrown rock provokes a corresponding reaction in the form of a police charge or baton attack.

Nation Estate is a nine-minute short from Larissa Sansour, offering a dystopian yet humorous approach to the deadlock in the Middle East. Using a mix of CGI and live actors, the film explores a solution to Palestinian statehood: a single skyscraper housing the entire Palestinian population, with each city on its own floor. This will be a UK gallery premiere.

The UK premiere of Jae Rhim Lee’s The Infinity Burial Project proposes a new, more environmentally-friendly way of decomposing the human body after death. The project focuses on the development of a unique strain of mushroom which decomposes and mediates the toxins found in all human tissue, and creates ‘burial suits’ containing these specifically harvested cultures.

Laurence Peyout’s 1 In A Million You project creates unexpected connections between strangers around the globe. Thanks to social networks’ ability to extend the power of ‘word of mouth’, people anonymously received a tattoo-like mask, documented their new identity with still and moving images, drawings, texts, and shared their own interpretation of the project online. Examples of this documentation will be exhibited at FACT.

China Miéville’s new texts, including new short story New Death will be presented as part of the exhibition through documents, installations and visualisations.