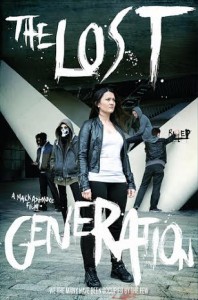 Future Artists, a young, independent film company from Manchester have recently released their first
full feature film The Lost Generation. With an enthusiastic buzz of excitement already surrounding the film, it has already enjoyed a very successful premiere screening last year with hundreds in attendance.

The film has subsequently been taken on by LoveFilm, iTunes and Asda, and is about to embark on a nationwide theatrical tour initiating with a screening and producer/director Q&A session at FACT Picturehouse in Liverpool this February.

See some more information about the film and to book tickets at: www.projectlostgeneration.co.uk

Heavily influenced by the true events of occupy movements and protests across the UK over the past 3 years, The Lost Generation portrays a very entertaining yet relevant depiction of our current media and society. We are invited to follow SJ – the inspirational female lead – on an epic fight for survival in a dystopian representation of our present-day world.

Despite the small independent team working on such a micro-budget, Future Artists have managed to produce a film with a very powerful and relevant message and we want it to be seen by as many people as possible.

If you would like to see more about the film and how it was produced, please take a look at this short behind-the-scenes video:

For any more information about Future Artists, visit our website at www.futureartists.co.uk.

FACT: Build Your Own: Tools for Sharing