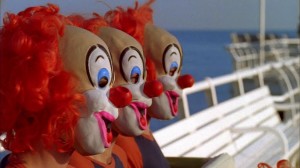 Tmesis – Tmesis Theatre – roduced & directed by First Take (15 mins)
Tmesis is a highly charged emotive movement based film set in a natural landscape and based on an ancient Greek story about the origin of love and sexuality and the reason why we are searching for our soul mate. It takes you back to the time where there were three sexes; the man the woman and the hermaphrodite. These eight-limbed creatures with two heads and their conflict with the Gods is a mesmerising evolutionary journey from the ancient Greek years to the modern man.

The Cost of Living – DV8 (35 mins)
David and Eddie are street performers struggling to get by in a seaside town. The Cost of Living follows them as they work, argue, fail at romance and fall out with old friends.

FACT: Semiconductor: Worlds in the Making