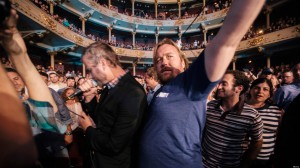 Fronted by singer Matt Berninger, Cincinnati indie stars The National embarked on a lengthy world tour in 2010. Unusually, The National includes two pairs of siblings – Aaron and Bryce Dessner, and Bryan and Scott Devendorf – and Matt Berninger also has a brother, Tom, an artist and aspiring movie director. Matt invited Tom along on tour as a roadie, allowing him to film the process, cinéma-vérité style; but neither brother, nor indeed the band and crew, could have predicted what a fraught and often unintentionally funny enterprise it would turn out to be. It’s obvious that Tom, often speaking direct to camera, has a high opinion of himself, and it’s equally obvious that he was a lousy roadie.

HACKY BIRTHDAY to FACT Bringing people, art and technology together since...