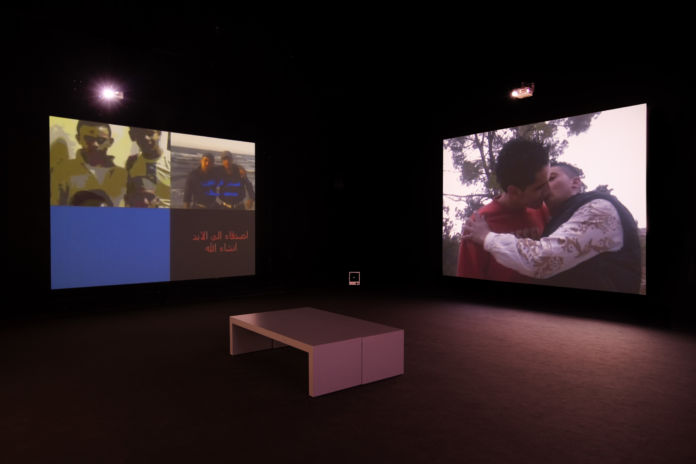 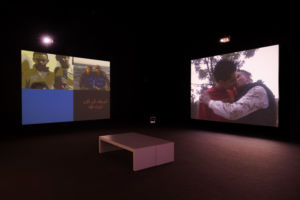 FACT will present one of the most ambitious programmes of contemporary artist film ever seen in Liverpool, as part of the Liverpool Biennial.

As part of the Biennial’s The Unexpected Guest exhibition, FACT is pleased to announce this comprehensive survey of artist film, inspired by the 2012 theme of ‘hospitality’.

Every Wednesday evening over the 12 weeks of the Biennial (and the
occasional Tuesday too!), events including film screenings, Q&A sessions,
artist performance and film forums, will see FACT become the weekly night-
time ‘hub’ of the festival.
Highlights of the film selection include the recently released Marina
Abramovic: The Artist is Present, Steve McQueen’s Shame, John Akomfrah’s
The Nine Muses and Ben River’s Two Years at Sea, offering an insight into
how the filmic work of artists is featuring more prominently within mainstream
cinema.

We are delighted to be welcoming a number of international artists to FACT
for Q&A sessions for a series of UK premieres and previews. Launching
the programme on September 13 will be an artist talk with some of FACT’s
Biennial artists: Anja Kirschner, David Panos and Jemima Wyman.

Polish-American artist Allan Sekula will have the Northwest premiere with
a Q&A on September 19, accompanying the screening of her maritime ‘film
essay’ The Forgotten Space. We are also pleased to be welcoming American
artist and filmmaker Wu Tsang to accompany the preview screening of
Wildness on October 24 ahead of the UK premiere at Tate Modern in 2013.
Further Q&A sessions will take place with Matt Wolf, Al & Al, and Karen Mirza
and Brad Butler, who will all be present alongside screenings of their works.

On October 9, Mexican artist Amanda Gutierrez will present the UK premiere
of her most recent piece of work, Time Topographies: Liverpool. This
project was created as a result of her recent residency at FACT as part of
the European Media Art Residency Programme (EMARE). A filmic triptych
portraying the story of three immigrants living and working in Liverpool, this

special presentation will feature a live performance from those featured in the
work as well as a Q&A session with cast and artist.

Tickets for all screenings and events are available now on 0871 902 5737,
online, or in person at the box office at FACT. For full listings and further
information, visit www.fact.co.uk.

FILM
The Creator (12A)
7 November
The Box / 6.30pm / £4/3 (FACT Members & concessions)
Directed by Al and Al / 2012 / 45mins
This film explores of the legendary myth of Alan Turing, father of the computer age and maker of
Artificial Intelligence machines. Combining Lynchian nightmare with the prophetic themes of J.G.
Ballard, The Creator takes you into the surreal dream world of the visionary scientist, where his binary
children embark upon a quest to discover their origins and destiny in the universe. This new film
commission premieres on the centenary of Turing’s birth. Commissioned and produced by Cornerhouse
and Creative England (previously as Vision + Media). This screening forms part of Homotopia Queer
Arts Festival.

EVENT / FILM
Preview: I Remember and Teenage (Cert TBC)
14 November
The Box / 6.30 pm / £4 / £3 (FACT Members & Concessions)
Directed By Matt Wolf / 2012 / 140mins
The director of the Arthur Russell documentary Wild Combination, Matt Wolf returns to FACT to
present previews of two highly anticipated films never before seen in the UK. I Remember is inspired
by Joe Brainard’s legendary memoir poem of the same name creating an innovative biography of this
underground icon. Teenage is adapted from the legendary Jon Savage book and tells the story of the
invention of teenagers. This film also forms part of Homotopia Queer Arts Festival.

FILM
Two Years at Sea (U)
21 November
The Box / 6.30pm / £4 / £3 (FACT Members & Concessions)
Directed By Ben Rivers / 2011 / 88 mins /
A man called Jake lives alone in a ramshackle house in the middle of the forest. Seen across the
seasons surviving frugally and passing the time with strange projects, he is living the radical dream
he had as a younger man. Ben Rivers’ debut feature-length work, shot on 16mm film, extends his
relationship with Jake, first encountered in his short This is My Land.