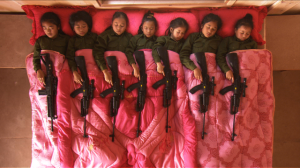 From 27 September on Channel 4

October 26 – Performance and talks at FACT

They are among the 25 artists that have been commissioned and curated by Jacqui Davies and FACT Liverpool for Channel 4’s strand of artist-led three-minute films.

The series has been curated by Jacqui Davies, independent producer and curator, and Mike Stubbs, director of the Foundation for Art and Creative Technology (FACT) in Liverpool, and features a wealth of internationally established and up-and-coming artists.

The series is scheduled to begin on September 27 with Marina Abramovic’s Dangerous Games. Each work will be broadcast on Channel 4 before being made available to view online.

Random Acts will be launched, as part of the Liverpool Biennial, with a one-day event of performance and talks at FACT on October 26.

Random Acts: Artist Interventions into Broadcast also celebrates the first anniversary of the series, and will bring together artists and key figures to reflect on the histories of artist working with the medium of television, from early broadcast interruptions to contemporary approaches and the rise of new media.

Mike Stubbs said: “We have curated a series of extraordinary, surprising and challenging three minute films with a variety of exciting and well-known artists, as well as some real talents to watch.

“FACT is Britain’s primary new media centre, and to commission short works from artists of this calibre is a great opportunity to move beyond the conventional gallery space, and increase our reach as art moves outside the building.”

Jacqui Davies: “ Curating 25 films for Random Acts presented a chance to work with some of the best and most exciting international artists practicing today. In the programme of works there is no house style or dominant aesthetic, just fantastic work ranging from poetic to intensely political, subversive, mischievous, awkward, aesthetic, minimal, to down right sexy…”

Tabitha Jackson, commissioning editor for arts at Channel 4 said, “We are delighted that our first partnership with FACT has resulted in such an extraordinary set of films.  Long may it continue!”

Johan Grimonprez, I May Have Lost Forever my Umbrella

Lucy Harvey, A Song of my Youth

Lewis Klahr, The Moon has its Reasons

Haroon Mirza, This content was transmitted to 1st April 1985

Martha Rosler, Because this is Britain

Semiconductor, Some Part of Us Will Have Become

Mark Wallinger, Ever Since

Young-Hae Chang Heavy Industries, WARNING: READING THIS MAY OR MAY NOT CHANGE YOUR LIFE

FACT – Breakfast With The Artists