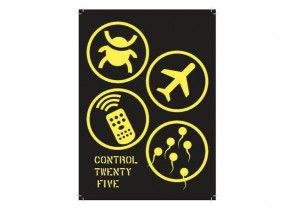 All Things Considered Theatre presents Control 25, Liverpool’s first large scale one to one performance event. Happening in everyday spaces and places, Control 25 invites you to surrender, share and take control as you go on a solo journey around the streets of Liverpool. The journey you take is up to you and will depend on how much risk you are willing to take. Which route will you choose?

What to expect  audience members will be creatively moved through the city as they participate in a series of intimate encounters created by a group of emerging and established local artists. The performances will be the result of a two week creative process were established artists/company, Ant Hampton, Sharron Devine and Kaleider will deliver a series of creative workshops.

What are the One to One encounters? At this stage it is difficult to tell you about the individual one to one performances as many of them are still in development.  I can however give you an idea of some of the work. One piece will explore ‘The sensation of being measured’. Another piece will involve going on a taxi ride with a Liverpool cabbie, the friendliest taxi drivers in the world!! or are they. You will be invited to sing your heart out in a phone box and find your inner ‘scouse cowboy’ on a super lamb banana rodeo. Another piece will invite audience/participants to walk in the shoes of a real life couple from Liverpool as we experience their first date, with another encounter exploring the simple moments in the life.

Why One to One performance  ? No longer do we chat to the butcher, the baker, the grocer whilst doing our weekly shop, instead we use the electronic self-service check out in the supermarket. We use a machine to withdrawn our money from the bank, we even scan a devise when we get on public transport. With an increase in virtual relationships via social media, modern technology is rapidly replacing the opportunity for daily person-to-person connections. There is a need for live interactions, the closeness and connectivity that One to One performance can offer is becoming increasingly more popular as participants are reaching out for meaningful one to one exchanges. This is the first time Liverpool has hosted a large scale One to One performance event. Liverpool is well known for its openness and generosity of spirit, it will be interesting to see how the people of Liverpool respond to the one to one performances that will be happening in their everyday spaces and places.

Why Control 25? There is a current trend of creating performance for an audience of one were the boundaries of audience and performer are often blurred, with audience/participants actions, stories and memories contributing to the performance dialogue resulting frequently with audience/participants co creating and taking on the role of the performer, writer or director. These exchanges raise questions of authorship and control, in terms of who owns and who is directing the narrative of the performance? And can audience/participants really be in control of an artist’s pre-planned concept? This is a topical discussion and the artists contributing to Control 25 intend to purposefully explore this notion within their work. Control 25 will question the equality and constraints of the invitation to collaborate in one to one performance.

Who are the artists? We will be working with a group of local artists from Hope Street Ltd, an amazing organisation that gives emerging artists from a variety of artistic backgrounds, film, performance, animation, sound the opportunity to collaborate and develop their individual practice. In late October the emerging artists and small group of local established artists will share their one to one ideas with  artists Ant Hampton, Sharron Devine and Seth Honnor. who will also share their methodology and ways of working . This will happen over a three-day period.

Ant Hampton’s work explores the notion of audience control in One to One through the idea of the unrehearsed performer; taking place in public spaces his work removes the performer, inviting audience members to take on this role. Often in his work two audience members meet on equal terms as strangers and perform the ‘play’ to each other via instructions on an earpiece. Sharron Devine as she is a One to One performer who has experience of working on similar projects. In 2010 she collaborated with Danish company Cantabile 2 on performance/instillation Venus Labyrinth, which consisted of 28 one to one performance encounters. Kaleider employ innovative ways to engage audiences. In their recent production ‘You with Me’ the performance for an audience of one uses the backdrop of city and is played out through a 45 minute telephone call.

FACT: Turning FACT Inside Out