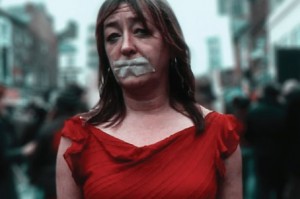 It’s been four years in the making and now Big Society – The Musical, a film entirely shot and produced here in Liverpool, will finally receive its Merseyside premiere.

The gritty film is set in Liverpool against the backdrop of austerity, where 40-something Linda works with young offenders.

Facing unemployment and the pending closure of her youth centre, Linda thinks only of Connor, a defiant 14-year-old who has no one, apart from her. Linda risks her relationship, her home and her reputation to help him. But as she fights for control, she realises she has none.

Big Society – The Musical takes the action of austerity protest marches and the spectacle of a west end musical and weaves in a personal story of finding a voice. It is social politics set to music, hard hitting and authentic, lifted with the help of a little northern British humour.

Using more than 300 locals as cast and crew, and filming in iconic locations like the Albert Docks and the Bombed Out Church, the film tells it story through 14 strong original musical numbers which range from hundreds of singing community members chanting down a street through to intimate and touching duets on a tall ship.

Local audience will finally get to see the long awaited film when it hits the screen at Picturehouse at FACT.