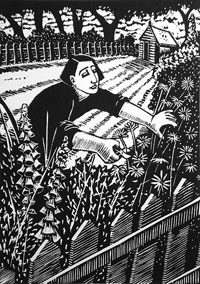 What better way to brighten up these grey days than with an uplifting shot of black and white. We are delighted to present a group show of new works from three very accomplished printmakers.
Kelly Dyson has produced work for (among others): The Guardian, Popular Mechanics Magazine, Health Service Journal, Rough Guides, Local Government Chronicle,  Oxford University Press,  Cambridge University Press, Building Design Magazine, Financial Management Magazine,  City Life Magazine, Pearson Education …
Colette Payne is a member of Hot Bed Press and produces images using the relief printing method of lino-cut.  She was born in Liverpool, grew up in Ellesmere Port, and is now based in Derbyshire.  Originally, she worked in nursing and midwifery, before completing a Fine Art Degree at Sheffield Hallam University in the early 90’s. She specialised in printmaking and has exhibited locally, winning the print trophy 2010 at the ‘Derbyshire Open’, and was accepted for Printfest 2011.
Frederick Jones says that although his printwork is superficially representational, being mainly urban and/or figurative, he is also concerned with the abstract geometries which remain visible in, or arise from, the world of appearances. The main influences on his printmaking have been the etchings of Rembrandt, and modern Dutch and Scandinavian printmakers. He has shown prints in Denmark, US, Canada, Egypt, Poland, Australia, Bulgaria, France, Estonia, and regularly at the Mall Galleries, London.