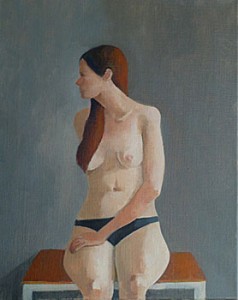 Dennis Spicer’s main subjects are still lives and figures. He likes to control the process, sometimes setting up the still lives to paint from observation, but sometimes making up arrangements of objects in his imagination to create paintings that have a tension and dynamic about them, where each is carefully considered in relation to the others and the spaces become just as important as the objects themselves. They do exist in his studio, but he uses them as a cast of characters to make up combinations that have never actually existed. Unusual juxtapositions appear in his paintings; a bird skull in an otherwise conventional still life. Sometimes the paintings start very cluttered, then a process of painting out will gradually result in a balanced composition.

With figures he tends to work from drawings of the model, transferred to the canvas to paint from memory and imagination. In both still lives and figures these processes involve a distancing from the actual subject to create space for the imagination and to make the painting less specific and more universal. Early and middle Renaissance painters such as Piero della Francesca and Massachio are important influences, as are the wall paintings of Herculaneum and later painters such as Morandi and contemporary American painters Alan Feltus and William Bailey. Formal colour field painters like Mark Rothko, Robert Ryman and Richard Diebenkorn have always interested him.

He has had two solo shows in London and has shown with the New English Art Club and in numerous shows both in London and the North West. His work is in the collection of the Williamson Art Gallery as well as many private collections in this country and abroad.

Dennis was winner of the 2012 Editions Liverpool Open