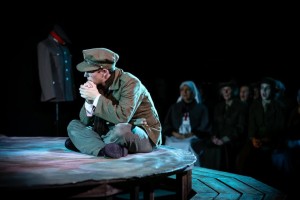 The First World War Centenary will be marked with an acclaimed production written by one of the University’s academics.

At once moving and entertaining, Silent Night brings to life the human stories of a group of Cheshire soldiers and the families they left behind.  Against a backdrop of archive images, original music and popular songs from the era, Silent Night vividly portrays events surrounding the historic truce of 24 December 1914. Drawn from the Chester region, a 25-strong choir will join the acting Company for the performance.

Silent Night is written by Helen Newall, Reader in Performing Arts at Edge Hill University. Helen is an acclaimed playwright and librettist, Writer-in-Residence at Theatre in the Quarter (TIQ) who have brought Silent Night to the stage, and also a maker of sound and visual installation work.

Helen Newall said: “I first wrote Silent Night 2008 for a production which toured later that year. The research was extremely interesting, especially as I had access to the archives and historians of the Chester Military Museum where I was immensely privileged to handle letters from the Front and a journal from the trenches detailing a witness account of the famous events of the Christmas Truce of 1914 and the involvement of the Cheshire Regiment in this truce.  As a writer, I’ve always been inspired by landscapes. The power of those words describing something almost miraculous happening in the shell shattered earth of No-Man’s-Land haunts me still.

“During the writing process, I also discovered that my great uncle, James Caldwell, died on the Somme on 7 July 1916. Suddenly, an historical event became much more personal. A friend laid a poppy for James at the Thiepval Monument where his name is included among the ranks of those whose bodies were never found. No-Man’s Land still claims him.”

Silent Night features original music by Matt Baker and is directed by Emma Lucia.  Matt Baker is TIQ’s founder and Artistic Director.  His numerous credits as a composer and musical director include productions for the Dukes Playhouse, Lancaster; The Nuffield Theatre, Southampton and the highly successful Chester Mystery Plays 2013.  Emma Lucia is an Associate Director at Clwyd Theatr Cymru, where her credits include Ghosts, Arms And The Man, Copenhagen, Educating Rita, God Of Carnage, A Doll’s House, Shakespeare’s Will and Oleanna.

Established in 2005, Theatre in the Quarter works with professional actors, experienced creative teams and members of the local community to make high quality, original music theatre.