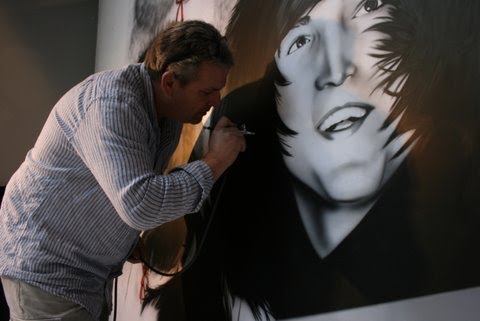 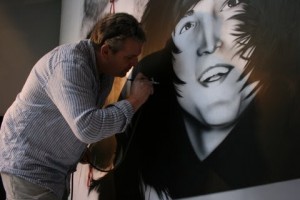 The city of Liverpool has produced some truly iconic figures throughout its history and right up to the present day. This Spring, Cumbrian artist Neil Arms has created a series of nine photo-realistic paintings of people who epitomise the spirit, energy and character of Liverpool, to be shown for the first time at dot-art.

Totally self taught, Neil has been an airbrush artist for nearly 25 years, producing photo and hyper realistic paintings. He started his career as a time served traditional sign writer and airbrush illustrator working for many large major breweries in the UK. In 1998 he transferred his skills to canvas producing large paintings of 20th and 21st century icons. His work has sold all over the world including Mallorca, the USA and Australia. Although portraits are his speciality, Neil also paints figurative and ambient images such as pebble stacks and water drops.

Sell out exhibitions have included the North Street Gallery, Leeds, and the Yacht Club Cala d’Or, Mallorca. The artist has also been commissioned by Yorkshire TV, several large bar chains, and numerous private and commercial clients. His most recent project with dot-art was a commission for Liverpool One, to produce large scale paintings for the window displays of their Christmas By Liverpool store; entertaining shoppers by completing the works in the shop’s windows during opening hours. Neil says:

“I’m very excited about finally displaying in Liverpool as I was bitten by the Scouse bug over Christmas while completing a commission for Liverpool One; it has to be the most “happening” city I’ve ever visited. I’ve specialised in portraits for twenty five years and picking nine Liverpool icons was a challenge as there are so many! But, hopefully the people of Liverpool will agree with my choices, some from years gone by and some from right now.”

The exhibition is open to the public from 12-6pm Monday to Friday and by appointment, at dot-art, 16 Queen Avenue, Castle Street, Liverpool, L2 4TX. Please call 0845 017 6660 or see www.dot-art.com for more information or to make an appointment. All work is for sale and admission is free.

Dot art: Sea – A Collection of Work by Andrew Lewis