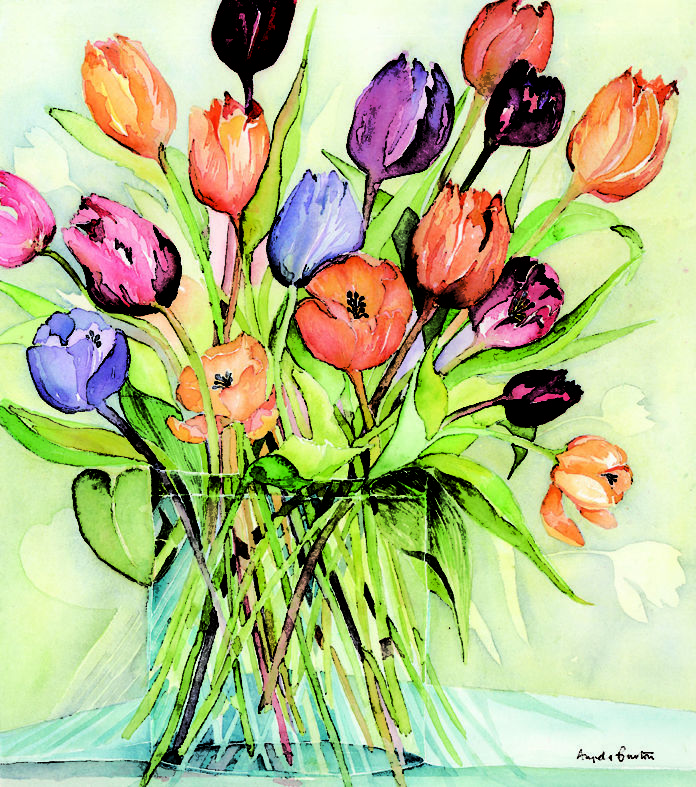 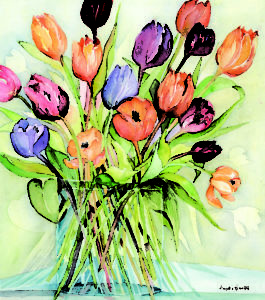 This February, the dot-art Showroom will host a collection of watercolours by Chester based artist Angela Burton, inspired the natural world of landscape, plants and flowers through the four seasons, in which the artist has allowed a combination of imagination and knowledge of the medium to influence the creation of a painting.

Angela Burton was born in Chester, attended the Queen’s School followed by the Froebel Educational Institute, Roehampton. She worked in a number of schools in London, specialising in art and craft, particularly pottery, which she taught to both children and adults in England and Germany. Family life has taken her to Germany, Northern Ireland and the United States of America, and it was while living in Washington DC that she began to specialise in watercolour painting at the Torpedo Factory Art School in Alexandria.

After thirty four house moves, Angela and her husband retired back to Chester, where she began to design her own garden to include many of the plants and flowers that she loves to paint. Her paintings take their inspiration, not only from Angela’s garden, but also from a very personal and eclectic mixture of objects and places that have been part of the diverse pattern of her life. She has exhibited in Germany and the US and more recently in 2009 at Ness Gardens and 2010 at the National Trust property Erddig in North Wales.

The artist says:  “Watercolour is exciting, subtle and unpredictable and to begin with requires careful thought and planning. The challenge is to allow the painting to take on a life of its own, becoming far more than just a conventional representation in paint. In these paintings I have tried to express the brilliance and translucent quality of the colours found in nature using imagination, atmosphere, shapes and patterns to engage the viewer in the creative process .”

“For example, in the piece “Spring Tulips”, I wanted to capture that transitional moment between Spring and Summer when the vibrant colours of the tulips and their contrasting foliage shapes are utterly joyful and herald the changing season. As the painting took on a life of its own the reflections and shadows became an integral part of the painting creating a balance and continuity of colour. “

“In contrast, the subject of the work “Chawton Woods in Winter”, at first sight was a cold, monochrome scene, still and heavily laden with snow. There was a sense of a journey to be undertaken to reach the other side or even a destination achieved. Looking longer, the scene became full of subtle colours highlighted by vibrant contrasts. This was nature tranquil and at rest. Our response to this scene was to marvel at the monolithic height of the trees, the delicacy of the undergrowth and to wonder what was beyond. It was my intention in this painting to create this atmosphere and to allow the imagination no boundaries.”

The exhibition is open to the public from 12-6pm Monday to Friday and by appointment, at dot-art, 16 Queen Avenue, Castle Street, Liverpool, L2 4TX. Please call 0845 017 6660 or see www.dot-art.com for more information or to make an appointment. All work is for sale and admission is free.