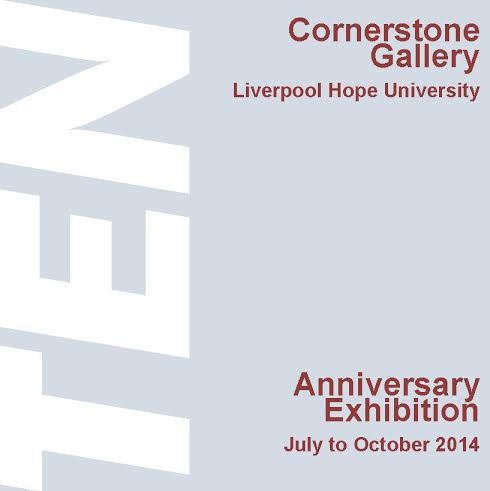 The Cornerstone Gallery is pleased to announce that it will be ten years young this summer. To mark this occasion the gallery is presenting an anniversary exhibition titled TEN to coincide with the Liverpool Independents Biennial.

The Gallery has hosted seventy-three exhibitions within the last ten years. These exhibitions include the annual Liverpool Hope University Fine & Applied Arts Degree Shows, the Pre-paid Charity Postcard Exhibition and Auctions as well as outcomes from International Residences here at the University.

Degree Show and Pre-paid events aside, over two hundred national and international artists have exhibited within a dynamic, interesting and specifically curated exhibition programme within the last ten years and we are hoping to represent as many of these artists in TEN as possible.

TEN is a testament to the artists who have made the Cornerstone what it is today and it is proud to invite sixty-five of these artists back to celebrate what has been a very exciting and thought provoking first ten years.

The Capstone – Contemporary British Silversmiths – SIDE x SIDE –...

The Cornerstone: The Beauty of the Beast