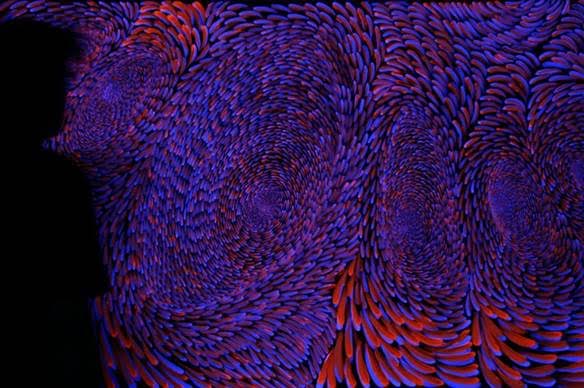 Born in Liverpool,  Jules spent a childhood with her head inside a sketchbook.  Art continued to be her focus throughout her education,  she was awarded a distinction from her Foundation Course in Art and Design at Liverpool Poly, was tutored by Sam Walsh and gained a BA hons degree in Graphic Design.

Moving to London in the 1990’s Jules worked in the creative industries sector, writing radio ads and rising through the ranks becoming the Creative Director of a Soho ad agency before setting up her own creative production company called ‘Spark and Rumble’ which she still runs today.

Throughout her professional life Jules continued to paint and draw.  Whenever she travelled abroad she would visit exhibitions and art galleries in search of inspiration and ideas which influenced the development of her own creative practice.

Her exhibition Mindplay – Series 1, on show at the Corke Gallery in June 2015, features a collection of new painting created after a trip to Australia to see the ‘dark side’ of Aboriginal art… not the  commercialized dots and squiggles, but a lesser-known style called ‘Bush Medicine Leaves’ that uses free-flowing patterns.  These clean, simple and repeating patterns had a big impact on Jules and she developed her painting style to create the smooth strokes that convey a depth and create the illusion of real movement.

As her practice in this form of painting develops Jules is currently experimenting with different paints and lighting effects including; glow-in-the-dark, disco, fluorescent and most recently UV, all of which add a completely different dimension to her pieces when darkness falls

The works range in size from 30cm x 30cm to 120cm x 180cm and are painted in acrylic on canvas and varnished.