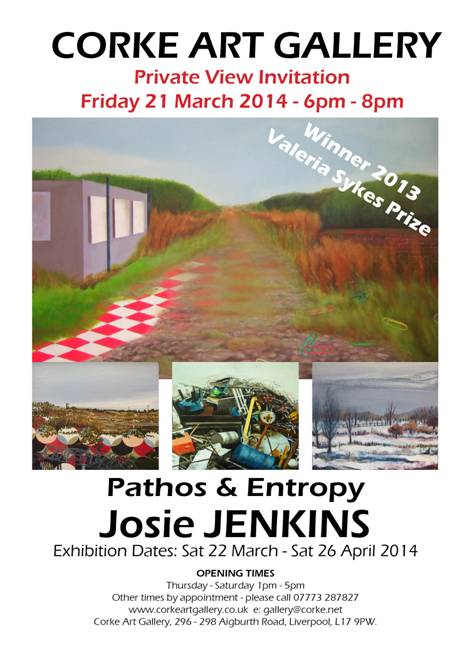 The exhibition of work included in the show explores the actuality and the disorder in our landscape.  The exhibition includes examples of past and recent work by the artist.

Jenkins’ previous work has focussed on the ‘edge lands’ between city and countryside, the visual consequence of heavy industry and overgrown wastelands or forgotten places with discarded objects that once had a purpose but have now become semi integrated with their surroundings.

Jenkins has extended these themes further to created the England Lost Me series of paintings which overlay similar imagery with pattern and fantastical elements.  This series includes Jenkins’ painting Geograph Collage with Paperclips which won the  Valeria Sykes Award in the New Lights Art Prize and will be on display in the gallery from 6 April 2014.  The exhibition will also include some drawings and examples from a series of work titled ‘Deadwood’ which uses old discarded pieces of wood to make free standing paintings which become objects in their own right.

Recent work on display includes Jenkins’ Scrap Yard series which comprises a number of small-scale paintings of scenes taken from scrap yards, using water based oils on board. This medium lends itself well to the work, which continues to combine realism with abstraction, but uses a more considered method of painting.

Artist Josie Jenkins will also be giving a talk about her practice and her recent winning painting at 19.00 on Friday 25 April 2014 – full details are on the website at www.corkeartgallery.co.uk