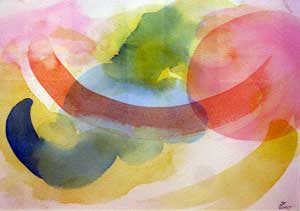 The exhibition features paintings, sculpture, stained glass and gravity defying model constructions which reflect John’s imaginary view of the natural world and have an oblique relationship between abstraction and nature.

John’s paintings combine vivid and the intricate use of colour, dramatic brushstrokes and intricate effects to convey scenes beauty in landscapes, still life and shifting shapes reminiscent of giant flocks of starlings weaving amazing patterns in the sky.

Artist profile ‐ John Fitchett
John attended the Liverpool College of Art from 1957 ‐ 1962 on a day release scheme from his job as wood pattern
maker/model maker. On returning to Liverpool from New Zealand he joined John Moores University as a senior
technician in the product design department.

After twenty years of teaching students the techniques of model making and manufacturing processes in industry he
retired in 2006 which allowed him to pursue his love of art and start painting.

John spent thirty five years creating designs in stained glass and his choice of watercolour as a medium was greatly
influenced by the similarity of the transparency of the dilute pigment to that of stained glass.

John’s greatest influence is the work of William Tillyer who brought watercolour painting into the 21st century
whose work is greatly admired by artists and critics alike.