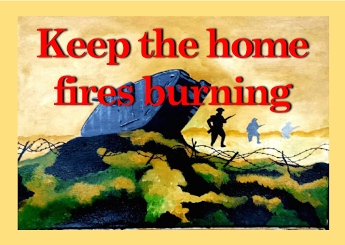 The First World War will be the theme of a new exhibition of paintings to be brought to the Clove Hitch gallery on Liverpool’s Hope Street.

Keep the Home Fires Burning will include paintings that shows aspects of the Great War and is the work of Liverpool artist Mike Rickett.

The six paintings are intended to show visual aspects of the horrors of the war – from the trenches with its barbed wire, mud and shell holes, to a countryside torn apart by shells and conflict and the men themselves who all too often became just figures in a nightmare landscape.

“I have attempted to translate the black and white images we all have of the war into my own interpretation of the battlefields and the men who fought on them,” said Mike.

“Together, they are intended to show the desolation and horrors of war and the futility of it. The paintings are intended to convey something of the atmosphere of the battlefields rather than a literal interpretation of any particular aspect.”

The exhibition will be Mike’s first solo show since he graduated with an MA in fine art in January. All the paintings were completed in his studio in Waterloo and have already been on show at a variety of locations in Liverpool during this centenary year of the outbreak of the First World War.

Also on show at the exhibition, by complete contrast, will be examples of his other work, mostly geometric paintings, collage and woodcuts of Liverpool scenes.

The exhibition is at the Clove Hitch gallery, (First floor) Hope Street, Liverpool.

The artist would like all six paintings to be permanently displayed where they will be seen and is happy to gift the work to the right venue. Anyone interested can view the paintings at the Clove Hitch until the end of October, and ask gallery staff for more details about how to purchase a piece.