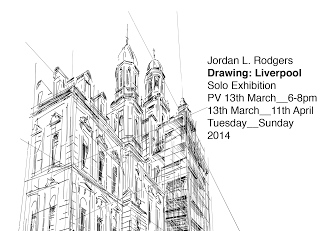 The Gallery – Clove Hitch, Liverpool is pleased to announce Drawing: Liverpool, a solo show by Jordan L. Rodgers. The exhibition presents his cross-disciplinary way of working to bridge the gap between traditional drawing and drawing on the iPad. His interest in conservation and preservation of historical British landmarks and buildings offer an opportunity to do something different, to push boundaries. He is the Artistic Director of the campaign running to save the façade of the Futurist Cinema building on Lime Street another famous landmark in the city in serious danger of demolition. Reconnecting with the city where he was born by exploring the affect the changing nature of the built environment has on the collective imagination.

Rodgers is a BA (Hons) Fine Art, First-Class graduate from Lancaster University, who presents cross-disciplinary drawing involving architectural visualisation. His style is reminiscent of cubist, futurist where the extended lines of the buildings appear to have angles, which have more potential than the visible; the invisible of the building. Since graduating in July 2012 his work has already been exhibited in selected group and solo shows and published in national and international art magazines and websites, including the Aesthetica Art Prize 2012, and the 100 Contemporary Artists 2013 Anthology and more recently the Jerwood Drawing Prize 2013.