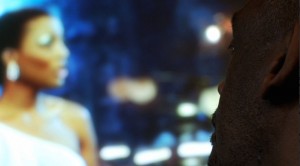 Following their inaugural show back in September 2013, All Together Now, which brought contemporary video artists living or working in Chester together, Here brings three North West based video artists with international profiles to the city. Acclaimed artists include Liverpool based Paul Rooney, Imogen Stidworthy and Manchester based collaborators Emma Rushton and Derek Tyman.

Paul Rooney was the winner of the 2008 Northern Art Prize and has exhibited in British Art Show 6 which toured around the UK in 2005-2006. Rooney has screened his work in Whitechapel Gallery, Kunst-Werke, Berlin and Museo Reina Sofia, Madrid to name a few. His film Dust, 2006 has been previously screened at Tate Britain. In Dust we hear a partly sung, partly spoken female monologue of a hotel maid influenced by the Brecht Weill song Pirate Jenny. The maid speaks of historical moments involving ships that do not berth and remain offshore. Accompanying the sound is a single unedited handheld shot from the point of view of a passenger restlessly circling the top deck of a commercial freighter which is tantalisingly within sight of land, but remains distant from it.

Liverpool-based artist Imogen Stidworthy has exhibited at major exhibitions such as Documenta 12 (2007) and Busan Biennale 2012, and curated the large group exhibitions Die Lucky Bush (Museum of Contemporary Art, Antwerp, 2008) and In the First Circle (Fundacio Tapies, Barcelona, 2012). Stidworthy also won the Liverpool Art Prize in 2008. In Barrabackslarrabang, 2009-2010 Stidworthy interweaves tropes of class, race, trade and desire in hidden backwaters and idealised forms of the voice – Standard Pronunciation and backslang. Speech is sewn with rogue sounds to confuse the ear, and slips easily in everyday banter into a linguistic game of skill and excess. In Barrabackslarrabang the voice criss-crosses social borders to reflect the mirroring of structures and desires in ostensibly opposing spaces of language, legality and culture.

Emma Rushton and Derek Tyman have worked in collaboration since 1997, solo exhibitions include Fear of the Surplus at The Tetley in Leeds ,2013-2014, Flying Down to Moscow at the Neues Kunstforum in Cologne, 2009 and Turf: Garden into Kwa Wan, Hong Kong, 2006. Their recent work has focused on location and events to examine the notions of public/civic space and ideas of belonging, community, nationhood and place. Their film Liar, 2013 makes reference to a ‘fantasy’ scene from the 1960s film classic Billy Liar. The film cuts between fantasy and reality as the character in Billy Liar William Fisher dreams of a life away from his existence in the North of England. Liar has been screened at Sub Urban Video Lounge, Rotterdam, 2013 to coincide with the crowning of King Willem-Alexander of the Netherlands.

The next Chester Film co op project will be Emerging Talent which opens on Thursday 14 August and brings together the regions best graduate film and video artists.